Skip to Content Jump to Main Navigation Skip to Search

You Are Here: High-resolution EUV Lithography

Development of interference and proximity lithography 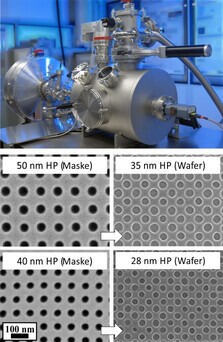 In the field of micro- and nanotechnology there is a strong demand for periodic structures such as line or dot arrays on the sub-100 nanometer scale. Application areas of such structures lie, among others, in the fields of nanophotonics, magnetic storage media fabrication or directed self-assembly of quantum structures. Despite a variety of alternative nanostructuring methods available, optical structuring methods still remain the most cost-effective solution for large area nanoscale patterning. By utilizing short wavelengths in the EUV range, one can achieve significantly higher resolution in comparison with currently employed deep UV lithography processes.

The realized nanopatterning setup EUV-LET (laboratory exposure tool) offers the possibility to pattern photoactive materials (e.g. photoresists) with EUV radiation (10.9 or 13.5 nanometer wavelength). The in-house developed transmission masks are optimized for proximity and interference lithography approaches. By utilizing interference effects, it is possible to create complex structures that extend the transmission mask design. The current minimal feature size of 28 nanometer will be driven even to smaller dimensions by the ongoing development of transmission masks and resist technology.

The high potential of modern nanotechnology can be fully realized only if a suitable production technology is available. For many applications, for example for magnetic storage arrays, sub-wavelength polarizers or nanophotonic antennae, periodic nanostructure line- or dot-arrays are required. EUV interference lithography is a suitable tool for efficient and high quality production of nanostructures with sub‑100 nanometer periods for arrays of several square-millimeters area. Among other applications, the group has demonstrated the applicability of the technique for the directed self-assembly (DSA) of quantum dots and the production of nanophotonic arrays. 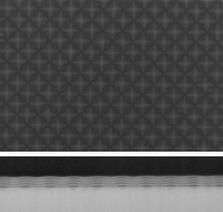 In collaboration with Research Centre Jülich in the frame of Jülich-Aachen Research Alliance for Future Information Technologies (JARA-FIT), densely packed and ordered arrays of Ge quantum dots on Si have been realized by a combination of EUV-IL, reactive ion etching (RIE) and molecular beam epitaxy (MBE). Such arrays demonstrate higher uniformity and degree of ordering in comparison to self-assembled quantum dots grown on plane surfaces. This opens up new possibilities for the application of such structures in novel quantum devices. 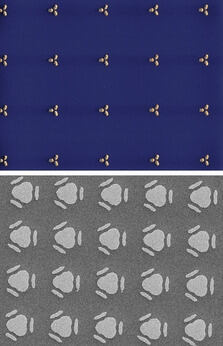 EUV proximity lithography is used for an efficient large-area production of micro- and nanostructures for nanophotonic applications, for example for surface enhanced infrared absorption (SEIRA). Unlike in traditional UV lithography, here the same mask can be used to produce a variety of complex geometries, by precise wafer-to-mask distance control and the utilization of Fresnel diffraction effects. To achieve the desired geometry, precise simulations of the diffraction pattern are performed and an optimal mask geometry and distances are determined. In contrast to electron-beam lithography, this method is largely independent of the substrate material and offers a higher flexibility.